To be best, we need the best.

This thought said out loud by Finnish biathlon legend Simo Halonen, and the offspring of Hyvinkään Kumi employee Yrjö Viirret were behind the birth of  Marwe’s roller skis, and especially our world-famous wheels.

Hyvinkään kumi was founded in 1926, The company produced high quality rubber and plastics components and it is one of the oldest plastics and rubber companies which still makes its products in Finland.

During the 1980s Yrjö was the foreman of former Hyvinkään Kumi´s metal department which to this day produces tools and moulds for manufacturing and his children Mikko and Eija-Maija Viirret  were promising skiers on the Finnish National Junior Team. In addition to cross country skiing, Eija-Maija and Mikko participated in biathlon practise  at the nearby Riihimäki shooting range, and were coached by former world champion Simo Halonen.  Simo became acquinted with the Yrjö, and asked him would it be possible to manufacture roller skis and ski wheels at Hyvinkään kumi.

During these times getting your hands on wheels and spare parts for roller skis was very difficult. Soon it became evident that the wheels produced by Hyvinkään kumi (kumi means rubber in English) were of a much higher quality than the competitors wheels available on the market. This lead to the companies decision to develop and produce their own roller ski.  The Marwe roller ski brand was born.

Together with Yrjö Viirret they started a success story that has led to numerous Olympic & world championships in Biathlon, Cross-country skiing, Nordic combined and Ski Jumping with the help from our world-famous skis as the perfect summer training equipment.
Not only have these afore mentioned forms of winter sports been aided by Marwes roller skis, but also the likes of Professional cycling, Horse back riding, Kayaking and other water sports, OCR running just to name a few!

Hyvinkään Kumi´s main target was to produce an affordable but at the same time high quality roller ski and also provide a reliable supply of replacement parts for the skis.  Local skiers worked in co-operation with biathlon world champion Simo Halonen in developing the skis.

Marwe´s  first pair of skis were sold in April 1986. These early models were suitable only for skating style skiing and the ski frames were made from aluminium, and  equipped with 80 x 40 mm rubber wheels.  Approximately  1000 pairs of these skis were sold during the first season of 1986.

The first model of the renowned Skating 610 roller skis was produced in 1990.  By the late 90’s Marwe developed their Combi Ski shortly followed by the Classic 800 C due to increasing demand.

Skating 610 A is a high quality, lightweight roller ski made with an aircraft-grade aluminum frame construction.The model is equipped with legendary Marwe urethane rollers, and has outstanding durability and wet grip in comparison to its competitors. model is used in the International Biathlon Union summer world championships and world cups as well as American, Swedish, Russian and Estonian biathlon championship races

This ski is one of our most popular roller skis. It is based on the original 610C composite model.Read more about this model during the summer of 2019

Marwes roller skis soon became the favourite summer training equipment for many top athletes. One of the the first to achieve success with the help of our skis was Finnish cross country skier Marjo Matikainen-Kallström (née Matikainen) As there was a need to train intensively round the year. She picked our skis as one of her main training methods in addition to Nordic walking and cycling.   Marjo was a familiar sight in XXXX roller skiing intensively. Pushing the physical limits soon paid off.

During her competition career, Matikainen-Kallström also won gold in the 5km classical and bronze in the 10km classical and 4 X 5 km km relay at the 1988 Calgary Olympics

The King of biathlon

This rather representative nickname belongs to other than the Norwegian king of  biathlon and  enthusiastic user of our skis Ole-Arne Bjørndalen. whose fathomless track record sports for example the following: 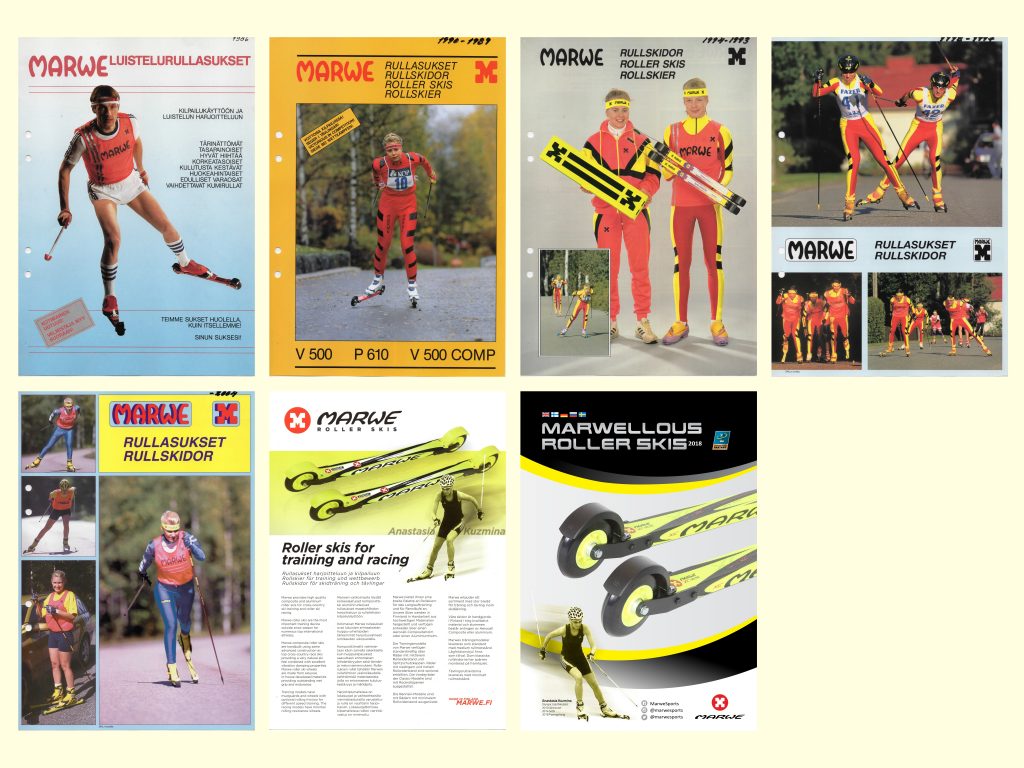 You can Pay for your orders with most common credit cards or via PayPal. We use Nets/Paytrail as our payment gateway.

We use reliable, global carriers to ship our products, including DHL and DB Schenker. We will suggest the best carrier depending on your delivery address.